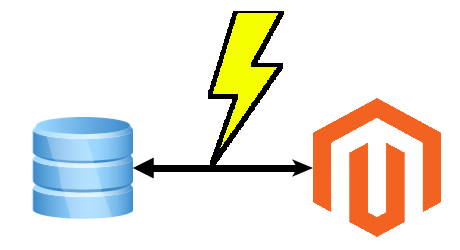 In my recent task I was testing a web crawler script which uses Magento database information for the crawling requests. I have encountered the following error:

This error occured after around 45 minutes of script runtime.
The script was written in a way that it was possible that there is no database interaction for a longer period.
In consequence to that when the script reached a point where it was trying to save or fetch something from the database, the mysql connection ran into a timeout – unnoticed by the script.
Thus resulting in the above mentioned MySQL error.

The variable controlling this timeout from MySQL is the wait_timeout system variable.

“The number of seconds the server waits for activity on a non-interactive connection before closing it.”

As it turns out we have already had this situation in another project – thanks to the netz98 developers for the hint.

The solution is to close the connection before using it – in case of long running and un-interrupted code part that does no database communication.

We have added the following code snippet to our ResourceModel:

With this method the Connection within the Adapter can be closed. When it is closed the connection will be re-initialized automatically with the next Database Interaction that is triggered by our code. To do so we introduced the parameter $useNewConncetion which enforces this behaviour.

Each time we have reached a point in our script where it could be possible that the connection hit the wait_timeout we just call this method with useNewConnection set to true.

I hope this article is helpful for you, in case you face the same situation. Feel free to comment if you faced this issue too or if you have any additions.