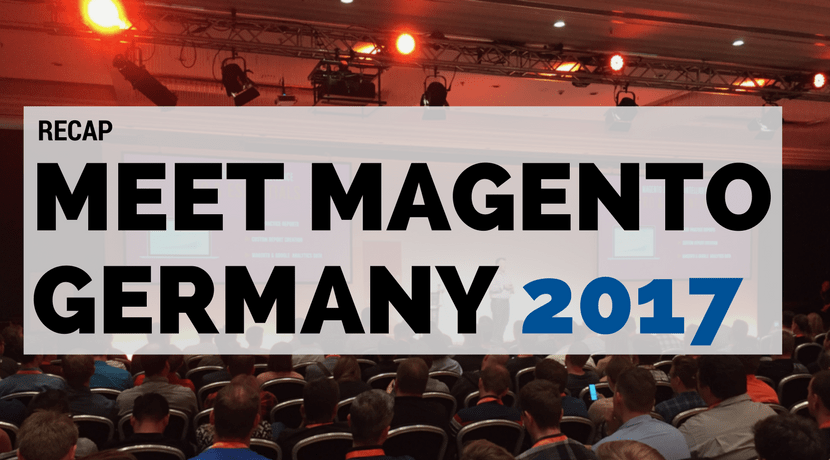 After attending my 10th Meet Magento in Germany (yes I missed one) and coming back to work, I think it is time for a short recap.
This years Meet Magento probably was the biggest one in terms of number of attendants (800, according to the organizers).
The location was at it’s limits for that amount of people.
Luckily the weather was sunny so people could get outside and get some space.
The next years Meet Magento will probably / hopefully be taking place in a better suited venue.
Besides that I had a lot of interesting conversations to old as well as new friends and contacts.
Mostly, I attended technical talks, for some of those you will get a short recap in this post.

But before starting with that, I have to mention the Pre-Party.
Although I have been attending the Meet Magento for quite some time now, I have never made it to the Pre-Party.
And after attending this years Pre-Party, I have to say that will change from now on 😉
The location was nice and it was a great way to catch up with everyone and get into the conference flow.

After the opening by the Meet Magento organizers, Paul Boisvert (Head of Product Management at Magento) held his keynote.
Sharing the vision for Magento and the achievements of the community and Magento itself.
He summarised the achievements during the Contribution Days at different events. 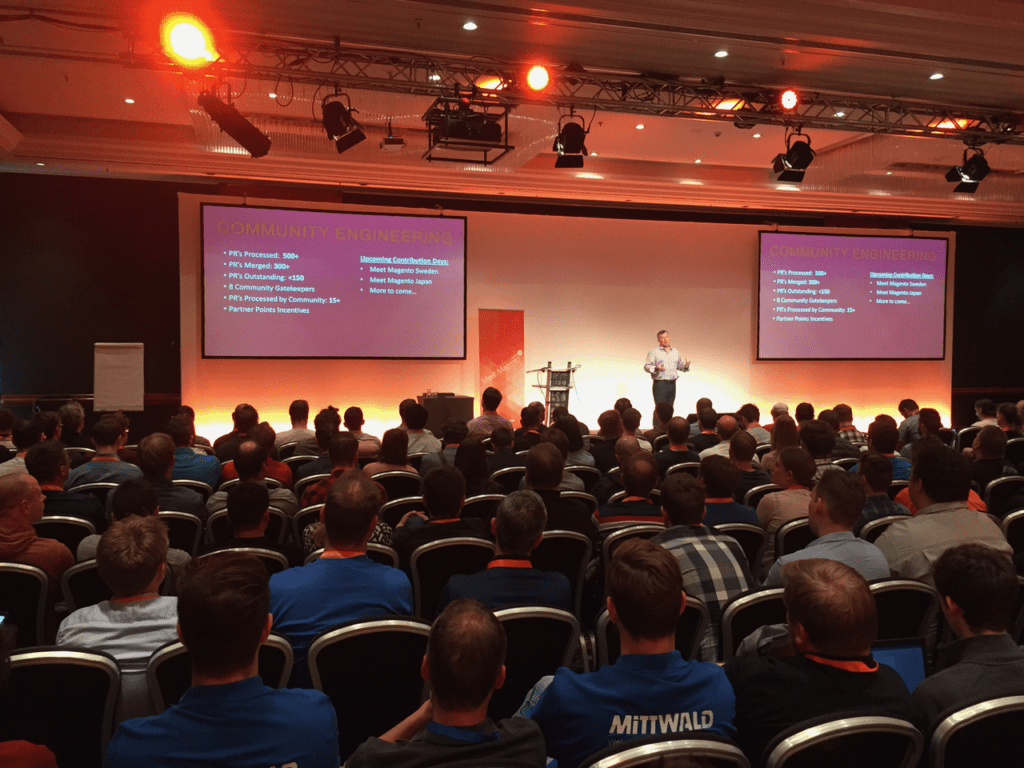 The most important part that we probably all like, is the change of their philosophy regarding the open source strategy.
In the past years Magento was delivered Open-Source, but there was no process or workflow for the community to contribute.
That changed in the recent months as you probably already noticed.
Magento is moving from Distribution to Contribution, which I think is the right thing to do.

You can already see quite some pull-requests being merged.
And during the Hackathon in Leipzig the community was working on the MNI – Multi Node Inventory module.

Marcel Hauri of Stämpfli gave his talk about his experience in running Magento in a production environment.
He summarized the issues he experienced while bringing and running Magento 2 in production.
Some of the modules and tools he created can be found on github: https://github.com/staempfli
His slides are a available here:
https://speakerdeck.com/mhauri/mm17de-magento-2-in-production

Besides that he gave a summary of points to improve the security, by limiting the access to the repository and server in different ways.

David Lambauer – an old colleague at netz98 – had is talk presenting a best practice workflow when developing for Magento.
He showed us how he is splitting up his code and how he is structuring that. 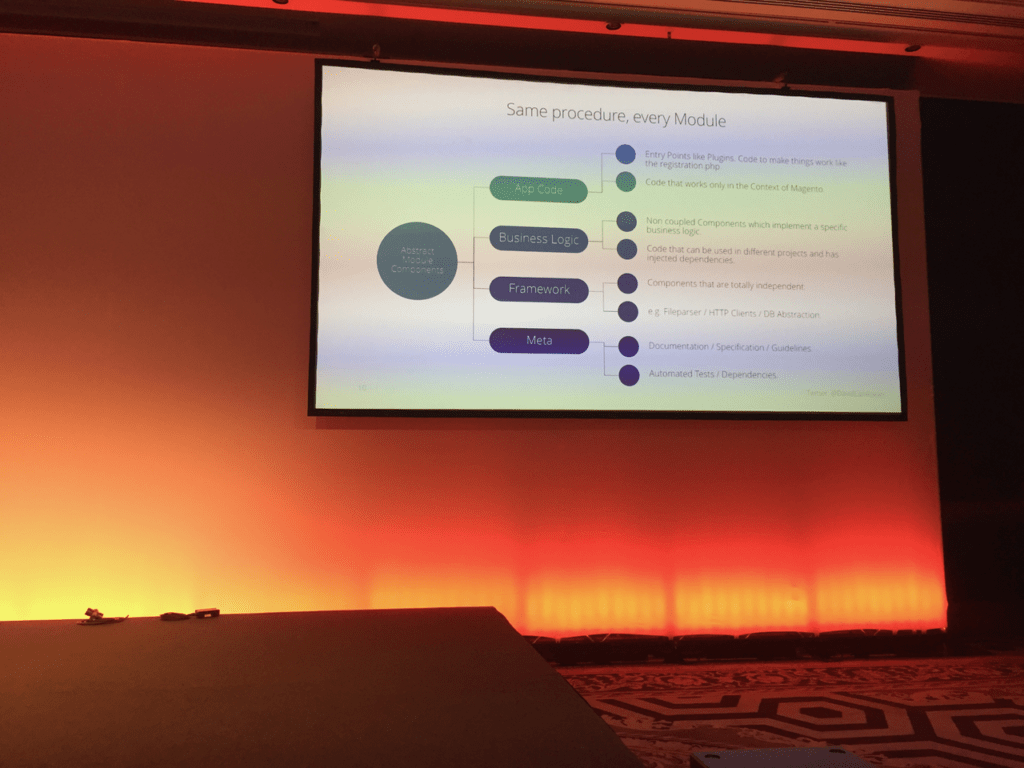 In my opinion, the most important part is to think before you code.
It is faster to think before hand and will payback afterwards, because when handling big tasks it is always good to have an overview of what you want to achieve as a final goal.
Furthermore if you do that in writing you have a plan on what to do and you don’t have to remember everything.
David also gave as an overview of the different types of tests that can be written to improve the quality of your code.

And at the end he shared a module skeleton he published on github:
https://github.com/AOEpeople/Magento-2-Module-Skeleton

The presentation was great to attend to and the workflows and approaches he described are great to produce high quality software.
I wonder where he learned all of that 😉

The keynote given by Magento CEO Mark Lavelle gave as a insights on the current status of Magento and where Magento expects to be in the future.
Furthermore we got an overview of the future Magento ecosystem and which systems are already included, which will be added and how the will be integrated.

This technical talk by Andreas Gies was about a middleware, how the middleware is built and how it is tested.
In almost every commerce project I have done over the years, there are always multiple systems and services involved.
It all comes to down to how they are integrated and tested.
This talk was about connecting those systems with a middleware in an high performance environment.
The architecture of the system looks like this.
Andreas also described how he simulates the messaging between the systems in a testing setup using docker containers.
Though it was not a directly PHP or Magento related talk, I still got some useful insights.

Fabricio Branca presenting his approach on SUPER-scaling an e-commerce project where Magento is involved.
We got a good overview of the general system architecture and an idea about the approach to extract parts of the systems and replace them through other services.
Basically each system provides a number of services to the construct.
The systems are inter connected by REST-APIs. By using APIs we retain the possibility to exchange services whenever needed.

The deployment of new release for those services / systems in an cloud-based environment was also part of his presentation.

After that Anna Völkl gave a practical overview of ways to improve the security of your Magento 1 and 2 systems.

She listed and described quite some modules and tools to improve the overall security of your Magento shops.

But security not only concerns the system itself, but also the way you treat the data, like when creating db-dumps.
You can use Magerun (1/2) to create database-dumps while stripping customer specific data from those dumps.

And she mentioned even more tools, which some of them I haven’t heart of till now.
It is definitely worth to check those out:

Then it was time for David Manners to explain his approach on how to un-magento your code. 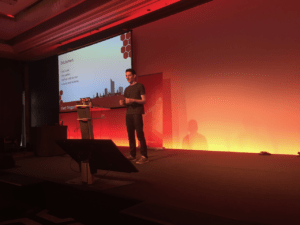 The basic idea is to separate your business logic and describe it through interface.
Especially when there is system specific actions involved like retrieving stuff from the database or getting some config-values.

I liked his view on things, as we have been following a quite similar approach for years now.
Not in terms of keeping code working in Magento 1 and 2 at the same time, but more like how to separate code into different levels and keeping system-independent.

Sadly there where some talks I would have loved to attend but I had to choose one.

It is always a pleasure to part of the The Meet Magento After-Show-Party.
The party is well organized and the food is great.
But since there were that much attendants of the conference this year, the party was packed to.
And the location was getting to its limits as well, although that was only really an issue during dinnertime.

Here are some impressions of that party.

Timelapse from the Buffet at the After Show Party sponsored by @maxcluster #mm17de pic.twitter.com/yS19q0D77N

The Meet Magento in Leipzig was a great event with lots of good talks and discussions.
I would have loved some more technical talks, because it seems the audience was there.
Every technical related talk had a full packed room.
Maybe we will see the next Meet Magento taking place in a bigger location with even more talks 🙂